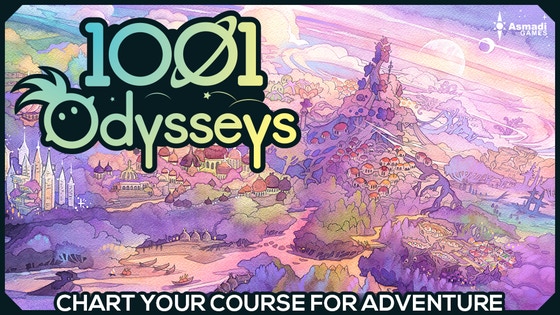 An adventure board game with storybooks full of journeys to visit new worlds, meet quirky aliens, and make many, many branching choices. 1-4 Players, 30-60 minutes per chapter.

Latest Updates from Our Project:

Hello and greetings, future Odyssey crew members! We have completed our summer travel circuit, and are back at home for a whole 8 weeks before BGGCon and PAX Unplugged later this Fall.

As mentioned in the last update, we've made a special demo chapter called The Admiral's Request, for use at conventions. It's designed to be shorter than a normal chapter, and people have been loving it! We're very excited by the response we've seen at both Gen Con and XOXO, and in various private demos we've run elsewhere. If you can't make it to a con but still want to see what's in the demo, worry not - we'll be making this mini-chapter available as a Print and Play set of PDFs later this year.

We even got to play it outside on picnic tables at XOXO, before rain came along and spoiled the fun:

Avallonis looks pretty awesome, and it should. It's the Federation capital, after all!

We have slightly refined the Action portion of the Action + Mission + Location paradigm for choosing a paragraph in the Story Book. Before, players were choosing what they wanted to do first. This often worked well, but sometimes it got repetitive or unpredictable.  Now players will choose to Focus on a feature of the location instead. This will let you read a bit more about what is going on in a location before you decide exactly how you want to act.

The Focus card simply replaces the Action card, so it's no more complicated than the previous arrangement. We've reshuffled the choices behind the scenes, so you get what you expect, and the number of results remains the same. People have responded well to this change, and it's more intuitive to choose what features of locations to focus on instead of whether to Talk or Look or Study (because you almost always wound up talking anyways!)

As you can see, the Focus card looks very similar to the Action cards from past versions. To give an example, if you chose to Focus on the View icon at the Capitol Bulbs, you could wind up looking at the beautiful landscape before you. The paragraph might then have a choice to inspect the orderly arranged bushes, or talk to the landscape painter nearby. Focusing on the Government icon there might send you to the administrative building, and so forth.

Playtests with this tweak have been going well, and it's helped improve the variety of the stories that we're writing. Now we can focus more on the features of the many locales we visit, which is fun.

We've been putting off opening the BackerKit in the hopes that we'd have some concrete idea of how tariff situations and Brexit would go, but it seems like that's simply impossible, so we're working on it now. 1001 Odysseys will be printed and assembled in the US, but a few of its bits will be sourced elsewhere. (Plushies, notably!)

Our goal is to have pre-orders available in the next few weeks.

We're prepping for Gen Con this week, but wanted to give everyone a quick update on things before we head out. We'll be doing a full update after we get back, at which point we'll be opening up the BackerKit!

We will be in Booth #2455, and we'll be showing off our fancy new demo episode of 1001 Odysseys - designed specifically for conventions. Up until now, we'd been using a modified version of the first chapter of Blast from the Chloroplast at cons. Now we'll have a mini-story that completes in a 15-30 minute session. If you're at Gen Con, come check it out! We will also be showing off One Deck Galaxy and Phoenix Syndicate, and selling a short run of copies of Aegean Sea, by Carl Chudyk.

But what you're all actually here for...is pretty art. So here's the mostly-done version of the  map of Avallonis :)

When we open up the BackerKit, we'll start shipping out canvases as well!

Greetings and welcome to Summer, everyone! (For those of you on the southern side of that Equator thing, welcome to Winter!)

One of the toughest things about creating this game is organizing all of our writing, both for collaborative purposes for editing + discussion, but also for exporting so that we can actually make a book out of thousands of disconnected paragraphs! (imagine a bulletin board with pins, yarn, and 1000 post-it-notes, detective style.) So, to manage our work on this game, and on the expansions that will surely follow, we (I) have been working on a custom database + web front-end to manage it all. It's nearly operational, and will make our lives much easier. Until now, we've been working in a mishmash of Google Docs and InDesign files. Hurray for thousands of lines of code!

As mentioned in the previous update, we've been working on the second of the four books that will be part of the base game. Why did we start with books 4 and 2? MYSTERIES!  All of the chapter parameters, missions, and game-flow have been completed, what will follow next is the writing + editing of the rest of the paragraph blurbs. And some cute art. Once we're done with that, it'll be on to books 1 and 3.

We also have been working on designing + backstorying all of the locations you'll visit in book 2, and the one or more worlds that those locations belong to! Worldbuilding is incredibly fun, and some of our best meeting discussions are throwing random ideas out there and seeing what sticks. We hope you have as much fun visiting these places as we've had creating them :)

Spring is busy convention season, so not as much art has been created, but the painting for Avallonis is happening very soon.  Lots of our focus has been on the almanac images for the various races. For example, this Zibzab:

You may have heard that Zibzab are gruff, but this fine fellow just wants to fix your spaceship!

We will indeed be at Gen Con this year - booth (#2455) in the expo hall, and we will be showing off a demo mission of 1001 Odysseys and the beta of One Deck Galaxy. This is a new demo mission we've created just for cons, so even if you've played before, come check it out!

You may have heard all the concern about tariffs and their impact on the board game industry. Not going to lie, the tariffs would hurt things A LOT, and they're foolish for a thousand reasons I won't go into here. Even if they do go into effect, they should not impact 1001 Odysseys. We're planning on printing the majority of the components in the US, and the things that will be impacted (pins, plushie) shouldn't be too bad.

We'll be taking pre-orders starting in August, so for people that missed out, that'll be your chance to join :)

Currently, Ivy has declared that it is Too Hot Outside, and will be napping soon:

Are there spoilers in the updates?

Some of the best parts of the 1001 Odysseys adventures are the parts when you encounter new worlds, meet new friends, and encounter wacky adventures. We enjoy writing those parts too! If this were another game, we'd be blabbing about the brilliant new character we just invented, showing off our lovely narrative tree, and maybe even livestreaming a writing meeting or two. But in this game, spoilers would have a big negative impact on the effect of the final prose. You wouldn't get to feel those jolts of discovery and wonder as you travel through Insula. But we've devised a balanced solution that will keep you up to date on our progress without ruining your future play. We'll be talking about the kinds of things we're working on, without using specifics from the narrative.

Our demo chapter is of course already out in the wild, and we may do additional demos or playtests of other chapters at conventions in the future, but we're not going to post spoilers here on our Kickstarter page, or on social media, or on Plumplim.com.

What have we been up to?

Sleeping! And after that, getting to work. Since the campaign ended, we've outlined and scheduled everything we're doing for the next year. We're taking the basic ideas for books 1, 2, and 3 that we developed during the campaign and we're building those ideas into sturdy story scaffolding. In Book 2, codenamed [REDACTED, BUT IT'S AN AWESOME PUN TRUST ME], we have mapped out concepts for all the chapters, and we're now writing introduction and conclusion prose, defining player mission trees, and designing all sorts of fun characters who will [MYSTERY] with you during the [INTRIGUE] and [BANANA] spectacular. It's going well, and we're having a lot of enjoyable writer-meetings talking about the adventures.

Last week, we brought our earlier prototype to PAX East, where we ran a couple dozen demos for attendees, and it was great to see peoples' eyes light up reading paragraphs, interacting with the components, and generally having a great time. I cannot overstate how satisfying it is to see people enjoy our stories, and thanks again to all the backers helping us make this game possible.

The other big task ahead of us is art. Above is part of Amanda's fabulous construction of Avallonis, the Federation capital world. We'll share more pictures as the painting process proceeds!

We're going to have canvases start shipping later this month, we'll be sending a note to backers who pledged for them asking whether they want to choose one of the already-complete paintings or wait to see the rest before deciding. Expect that in two weeks.

The BackerKit is going to come in two stages. Stage one is pre-orders, for folks that missed the KS campaign. Those will begin late this month, available for US-only. Stage two will be collection of addresses and add-ons and pre-orders for non-US people. That will happen this fall.

It's fun though, we're excited to be creating for you all. Until next time!

A fantastic finish to the campaign! Good work, everyone.  Just 5 hours left!

Over 2000 people have joined us on our journey to Insula, and I'm thrilled at the positive response we've gotten overall. With 1001 Odysseys, we set out to do something different. An adventure game about exploration without conquest, about alien contact without combat, about discovery without destruction.

We'd seen just how much people were having fun playing prototype versions of the game at conventions, but it's always uncertain how the world at-large will respond to a KS campaign. And especially when we ran a campaign that truly is here to allow us to make the game - we still have many many stories to write, art to complete, cards to lay out. Lots of tabletop KS campaigns now launch on a fully-done game, ready to be sent to print. But we Kickstarted an idea in progress, and we're so very glad you all liked it enough to help us fund.

You're going to go on SO MANY ADVENTURES. Thank you <3

Our final design diary tackles the topic of collaborating as a team to write!

We set out to have a branching web adventure to show you all our writing style. And it's been a ton of fun to see votes pour in for how you wanted the story to proceed, and to give you a taste of Insula, with the first contact, then Arraveen, and now Terragast! We hope you've enjoyed it.